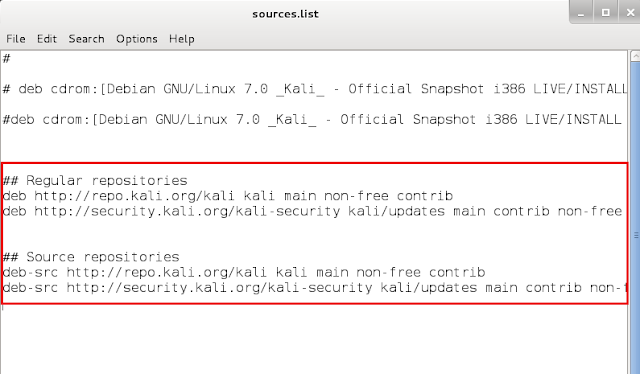 On a standard, clean install of Kali Linux, you should have the following entry present in /etc/apt/sources.list:
deb http://http.kali.org/kali kali-rolling main non-free contrib
You can find a list of official Kali Linux mirrors here.

In case you require source packages, you might also want to add the following repositories as well:

WARNING: While kali-dev is publicly accessible to everybody on all Kali mirrors, this distribution should not be used by end-users as it will regularly break.

This repository is actually Debian’s Testing distribution with all the kali-specific packages (available in the kali-dev-only repository) force-injected. Kali packages take precedence over the Debian packages.

Sometimes when Testing changes, some Kali packages must be updated and this will not happen immediately. During this time, kali-dev is likely to be broken. This repository is where Kali developers push updated packages and is the basis used to create kali-rolling.

About Kali-Rolling Repository.
Contrary to kali-dev, kali-rolling is expected to be of better quality because it’s managed by a tool that ensures installability of all the package it contains.

That tool picks updated packages from kali-dev and copies them to kali-rolling only when they have been verified to be installable. Note however that those checks do not include any functional testing.

It might still contain broken software due to other problems that are not covered by the package dependencies.

Primary Repository is Kali Rolling Most Users Should Be Using.
They can also report any issue they have with Kali specific packages on bugs.kali.org. Make sure to select the “kali-dev” version in “Product version”.
Kali Rolling users are expected to have the following entries in their sources.list:
deb http://http.kali.org/kali kali-rolling main non-free contrib
#
#
#

The Kali Linux distribution has two repositories, which are mirrored world-wide:

When using the default hosts listed above, you’ll automatically be redirected to a mirror site which is geographically close to you, and which is guaranteed to be up-to-date. If you prefer to manually select a mirror, click on the mirrorlist link near each hostname above and select a mirror that suits you. You will then need to edit your /etc/apt/sources.list file accordingly with the chosen values.
IMPORTANT! Do not add additional repositories to your /etc/apt/sources.list file. Doing so will most likely break your Kali installation.

How to Set Up a Kali Linux Mirror

To be an official Kali Linux mirror, you will need a web-accessible server (http required and https if possible too) with lots of disk space, good bandwidth, rsync, and SSH access enabled. As of early 2015, the main package repository is about 450 GB and the ISO images repository is about 50 GB but you can expect those numbers to grow regularly. A mirror site is expected to make the files available over HTTP and RSYNC so those services will need to be enabled. FTP access is optional.

Note on “Push Mirroring” — The Kali Linux mirroring infrastructure uses SSH-based triggers to ping the mirrors when they need to be refreshed. This currently takes place 4 times a day.

If you don’t have yet an account dedicated for the mirrors, create such an account (here we call it “archvsync”):

Create Directories for the Mirror

Create the directories that will contain the mirrors and change their owner to the dedicated user that you just created:

Next, configure the rsync daemon (enable it if needed) to export those directories:

Now comes interesting part: the configuration of the dedicated user that will handle the SSH trigger and the actual mirroring. You should first unpack ftpsync.tar.gz in the user’s account:

Set Up the SSH Keys

The last step is to setup the .ssh/authorized_keys file so that archive.kali.org can trigger your mirror:

If you have not unpacked the ftpsync.tar.gz in the home directory, then you must adjust accordingly the “~/bin/ftpsync” path, which is hard-coded in .ssh/authorized_keys.
Now you must send an email to devel@kali.org with all the URLs of your mirrors so that you can be added in the main mirror list and to open up your rsync access on archive.kali.org. Please indicate clearly who should be contacted in case of problems (or if changes must be made/coordinated to the mirror setup).
Instead of waiting for the first push from archive.kali.org, you should run an initial rsync with a mirror close to you, using the mirror list linked above to select one.

The ISO images repository does not use push mirroring so you must schedule a daily rsync run. We provide a bin/mirror-kali-images script, which is ready to use that you can add in the crontab of your dedicated user.

You just have to configure etc/mirror-kali-images.conf.

# m h dom mon dow command
39 3 * * * ~/bin/mirror-kali-images
Please adjust the precise time so that archive.kali.org doesn’t get overloaded by too many mirrors at the same time.
#
#
#

We’ve seen many people break their Kali Linux installations by following unofficial advice, or arbitrarily populating their sources.list file with unneeded repositories. The following post aims to clarify what repositories should exist in sources.list, and when they should be used.
Read More →

BackTrack Linux introduced a “Forensic Boot” option to the operating system that continued on through BackTrack 5 and now exists in Kali Linux.
Read More →

In keeping with the Kali Linux Network Services Policy, there are no network services, including database services, running on boot so there are a couple of steps that need to be taken in order to get Metasploit up and running with database support.
Read More →

This document explains how to make use of NVIDIA video hardware and install the drivers on a Kali Linux system. The first step is to fully update your Kali Linux system and make sure you have the kernel headers installed.
Read More →

Should you decide to install Kali Linux within VirtualBox, you will need to follow the instructions below in order to successfully install the Linux Guest Addition tools.
Read More →

VMware Tools in a Kali Guest

Should you decide to create your own VMware installation of Kali Linux rather than using our pre-made VMware images, you will need to follow the instructions below in order to successfully install VMware Tools in your Kali installation.
Read More →

Kali Linux
This Linux Distro have gained popularity recently quickly. The reason for popularity is legilized hacking, and made shiny brand new for the wife and kids.

Purely clean hacking is new in town and back as the cool-thing-to-do in pop-culture, and may-be attributed to the TV series Mr. Robot.

Kali is one of many hacking focused Linux distributions, and said by many that Mr. Robot’s popularity place a fire-cracker under Kali Linux's ass getting new users.

The graph below validates this claim.


People have little knowledge of Linux or related to computer security are now trying to use Kali as their main Linux distribution getting the feel of Heroin addicted Mr. Robot's hacker life style.

Look at Kali Linux tools and you’ll find so many tools that relate to ‘hacking’.
But Kali Linux was certainly not designed for that purpose.

Of course, I could easily write an article explaining why it’s wrong to use Kali as a first Linux distribution. In fact, you could find great arguments here and here to dissuade you from using Kali unless you really have specific needs.

But I wanted to do something different. So I installed Kali Linux in VirtualBox and tried to put myself in the shoes of a ‘new user’ trying some basic tasks on his brand new Linux system. So, will I encounter some issues or will it be straightforward? Stay with me up until the end of this article to read my conclusions. 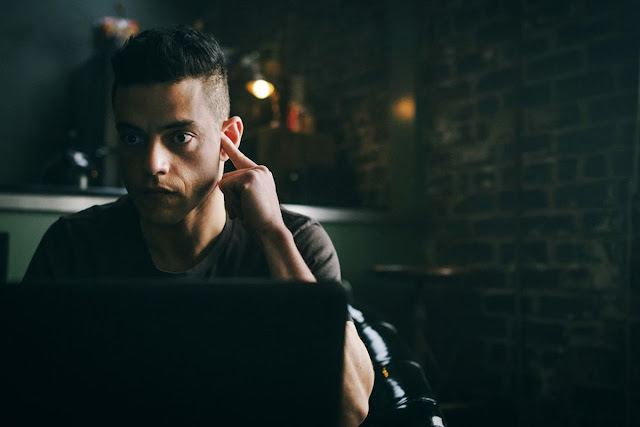 The Linux core is Debian and their previous core was Knoppix-based digital forensics and penetration testing distribution BackTrack.

A Linux Distribution is nothing more than a bundle containing the Linux kernel, a set of core utilities and applications and some default settings. So, Kali Linux does not offer something unique in that sense most of the provided tools could be installed on any Linux distribution.

The difference is Kali is pre-packaged with those tools and the default settings were chosen according to the intended use cases of that distribution, rather than, say, to fit the needs of the typical desktop user.